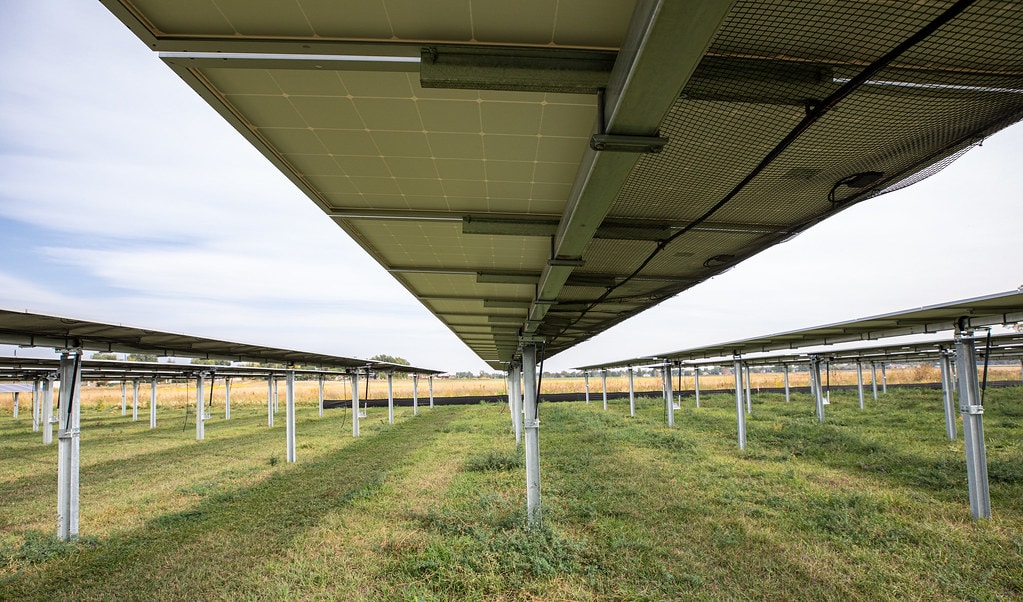 Making Hay and Electricity While the Sun Shines: Agrivoltaics provides a bright opportunity for Australian Agriculture

In a vineyard in Herault, a region of Southern France, an imposing structure towers over three rows of black grenache vines. The industrial formwork covers around 600 metres of the vineyard with 280 dynamic solar panels mounted on top, providing a generation capacity of 84kW.

Importantly, the solar panels are mobile and, in conjunction with artificial intelligence (AI), are able to move in real time in response to both the requirements of the vines and environmental factors.

“Artificial intelligence is programmed to favour the growth of the plant,” said a representative from developer SunAgri. “In the event of extreme climatic hazards – drought, heatwave, hail, frost, heavy rain etc – the AI ​​controls the panels to protect the crops.”

Over the course of the trial, the panels shaded the vines during heatwaves with a 12-34% reduction in the amount of water required. The developers also reported an improved aromatic grape profile with 13% more anthocyanins (red pigments) and between 9-14% more acidity.

Closer to home, Australia’s abundance of sunshine could prove to be an ideal match for the development and commercialisation of agrivoltaics. Wynergy, a New South Wales-based company, operates several agrivoltaic enterprises, selling wholesale and retail energy back into the National Energy market.

They also develop and install systems for landholders who are keen to take advantage of their land and abundant sunshine. In addition to developing an additional stream of revenue, the raised solar tracker systems installed by companies like Wynergy have proven to have a range of agricultural and environmental benefits.

The company points to several studies from the US that have shown the shading effect of the panels creates an increase of up to 328% in soil moisture, a 90% increase in biomass production and a 200% increase in carrying capacity. The ability to provide additional shade to livestock also raises animal welfare and standards and could positively benefit animal health.

Even solar panels perform better in an agricultural setting with evidence showing that the microclimate surrounding them has a lower temperature, increasing panel performance.

The New South Wales State Government has shown its support for the potential of the technology by providing funding to Farrer Memorial Agricultural High School to integrate a 60-kilowatt system on Farrer Farm.

The system, which includes solar panels built on raised platforms, will replace four diesel irrigation pumps with electric pumps, saving the school around $75,000 per year in energy costs, in addition to agricultural and environmental benefits.

“The amount of money we will save each year is considerable, but there will also be valuable educational outcomes for our students,” said Farrer Farm Manager Andrew Eather.

“The agricultural industry can benefit immensely from agrivoltaics and this project will certainly educate students about the synergies between agriculture and renewables in a changing climate, both now and into the future,” he added.