New Technology Promises Clean and Green Fruit and Vegetables, without the Use of Water 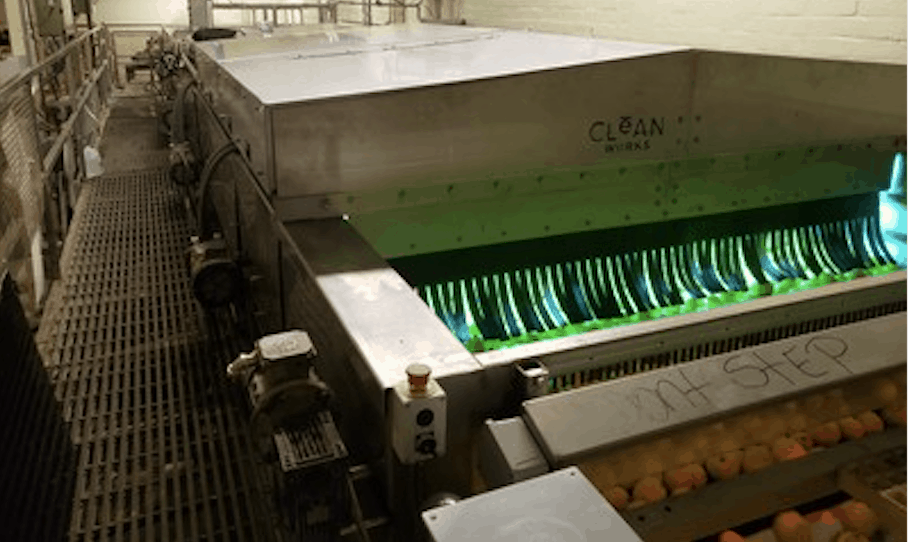 28 Aug New Technology Promises Clean and Green Fruit and Vegetables, without the Use of Water

Posted at 09:03h in Enews by devadmin 0 Comments

Grower-developed technology in the US is revolutionising the way that fresh fruit and vegetables are decontaminated, attracting global attention from fresh produce sectors.

In 2015, a Listeria outbreak in North America created a sector-wide crisis for caramel apple growers, prompting the industry to consider how they could improve the decontamination process.

One farmer, Paul Moyer from Moyer Apple Products in Canada, set about to solve the problem, developing a system that combines the use of ultra violet light, vaporised hydrogen peroxide and ozone gas to decontaminate the surface and subsurface of apples.

Moyan joined forces with manufacturer Court Holdings to develop the technology for market under the brand Clean Works. Now commercially available, Clean Works units can be installed at various points during the supply chain including on-farm and at pack houses through to wholesale and retail sites and even in restaurant kitchens.

The main advantage of the technology is its ability to kill up to 99.99% of pathogens, including potentially deadly bacteria like Listeria, as well as mould. Traditionally, fresh produce is treated with a chlorine solution, but this only offers a 50% reduction in contamination. Clean Works technology also eliminates the need for water to be used in the process altogether, helping the industry to reduce its reliance on an increasingly scarce input.

According to Joe Symons, General Manager of Clean Works, the technology is being adopted throughout the fresh produce industry including larger industry players such as Sunkist and Mission Produce.

“We’re seeing grapes, citrus and apples as being the first innovators using our products. And then we’re actually seeing a lot of opportunity and great results with leafy greens, romaine lettuce and things along those lines.”

“As a side benefit of our technology, we’re able to reduce the pesticide residue by 25-50%”; this is an especially attractive capability for industry players who otherwise wouldn’t be able to ship to the continent.

“We have certain products that are grown in North America that we’re unable to ship to Europe because of their higher pesticide residue levels. So we have that advantage of being able to reduce that going into Europe,” he explains.

Clean Works technology is gaining customers world-wide, including installations in Australia, representing a diverse cross section of fruit and vegetables.

“We’re seeing a lot [of interest] at the farmer level and from the producers or the packers as well. We have installations ranging from Southern Ontario, where we are, California and Australia.”

“We have interests coming out of China, Southeast Asia, and Nepal. Africa is actually an emerging market for us as well … We do receive a lot of inquiries coming in from the avocado industry and a lot of that is coming out of Chile and South America.”

The European industry has also expressed interest which Symons attributes to the “very high standards for pesticide residues on their products.”