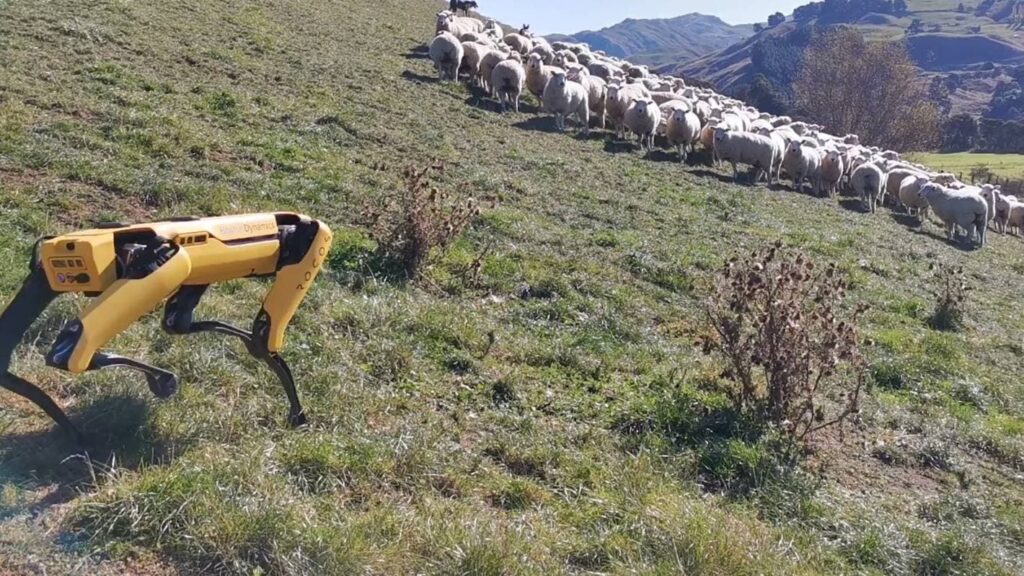 Spot the Robotic Dog Highlights the Potential for AgTech

Technology has been applied to diverse facets of agriculture, from monitoring crop health to tracking yields and improving the precision of a variety of tasks across all sectors of the industry.

But what if technology could replace the humble working dog?

That’s a question being posed by Boston Dynamics, a Massachusetts-based robotics company that has developed Spot, a robot capable of working across diverse environments.

Spot was originally developed for a range of applications outside agriculture. Boston Dynamics promotes Spot as being suitable for inspecting high risk sites such as construction, oil and gas and mining.

During the pandemic, Spot was deployed to counsel patients and enforce social distancing guidelines. Healthcare is another realm that the developers see as being a fit for Spot, including Spot’s ability to “triage patients, deliver food and medicine, or disinfect rooms from afar.”

In a recent collaboration with New Zeland robotics firm Rocos, the developers sought to see what capability Spot might have on farm.

“We were interested in what the future holds for robotics and we thought it might be interesting to take Spot to a sheep and beef station and let it run around,” said Rocos’ David Inggs.

“We didn’t really have expectations that it was going to be replacing the dogs on the station but we were incredibly surprised at how agile the dog was and it gave us a very interesting look of what the future holds.”

In addition to working sheep, Spot was also used to inspect crops and collect valuable information which it can then transmit back to a central data point for a farmer to analyse and use in decision making.

“Equipped with payloads like heat, LIDAR, gas and high resolution camera sensors, Spot navigates rugged environments to capture data in real time – feeding this data back into existing business systems, wherever they are located.”

“In agriculture, farmers can access information such as more accurate and up-to-date yield estimates. This provides access to a new category of automation, and a safer, more efficient business.”

Spot can be operated remotely meaning that it could offer farmers a greater range of flexibility in managing their farms, with the ability to traverse fairly extreme terrain reducing the risk for famers and employees.

While the trial was a proof-of-concept activity rather than a strategy to commercialise Spot for agricultural purposes, the partnership has shown how versatile robots are in terms of the scope of their abilities as well as the breadth of the industries that they apply to.

And in case you were wondering, it seems that Spot was accepted by its canine counterparts.

“The really interesting thing is that domestic dogs really don’t like Spot at all they find that it’s a very strange machine or weird animal but the farm dogs didn’t react at all they just treated it just like a farm bike, just like another machine that was on site and the sheep actually just manoeuvre away from spot as if it was another dog.”

“I’d say Spot is no where near close to replacing those dogs, they have generations of breeding and instinct that AI is a long way off replicating but it did show how many us cases it is valuable already.”