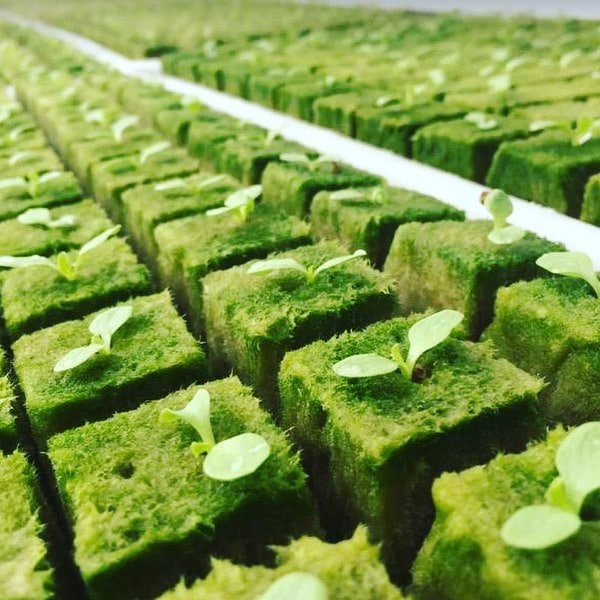 Meet Angus the farmer. Weighing in at 450kgs, he’s probably on the larger side of most farmers you know, but in actual fact Angus is one of the world’s first mobile robot farmers, working in an ultra high-tech warehouse in Silicon Valley.

Iron Ox, the owner of Angus, operates the world’s first fully autonomous farm growing a range of leafy greens including butter head and red romain, along side herbs such as basil. This high tech farming model is capable of growing the equivalent of 30 acres of outdoor production from a just a one-acre laboratory.

Crops are managed based on three stages of their life cycle, with inputs and plant density optimised to favour high quality, quick growing crops. Younger plants are grown densely, but are given more room as they mature, saving floor space by providing them with only what they need.

The omni-directional, self-driving robot known as Angus is responsible for moving trays of plants around the warehouse, while a robotic arm moves individual plants from one tray to another. The system is also capable of detecting plant pests and diseases and removing infected plants instantly, drastically reducing breakouts and crop losses.

“So it’s not just that the robots can move plants around, and very efficiently, it’s also that they can help you avoid ever having a plant go bad,” said co-founder and CTO Jon Binney.

The company’s pesticide free status also gives them a marketing advantage when it comes to selling produce to the consumer. Iron Ox says that their produce has superior taste qualities, improved consistency and can be delivered to the end-user quicker than conventionally grown produce.

For founder Brandon Alexander, the creation of Iron Ox was a direct response to the experiences of his own farming background. Hailing from a farm in Texas, his family struggled with both succession planning and sourcing external labour. This, in addition to the requirement for agriculture to significantly increase production, led Alexander to consider a drastic alternative to traditional farming models.

“If we’re going to need to double food production in the next thirty years to feed the growing population, we felt there needs to be a radical change,” said Alexander.

Not only does the use of robots make farming ultra-precise but it also means that labour components of operations can be carried out around the clock, so long as the robot has the power to undertake its jobs.

While Iron Ox’ operations are limited to just one farm at present, future expansion plans include the development of similar models in densely populated areas so consumers have access to fresher food, as well as diversifying their plant selection to include crops like tomatoes.

“Right now fresh produce really isn’t all that fresh. It’s travelling on average 2,000 miles from farm to grocery store, which means a lot of people are eating week-old lettuce or strawberries.”