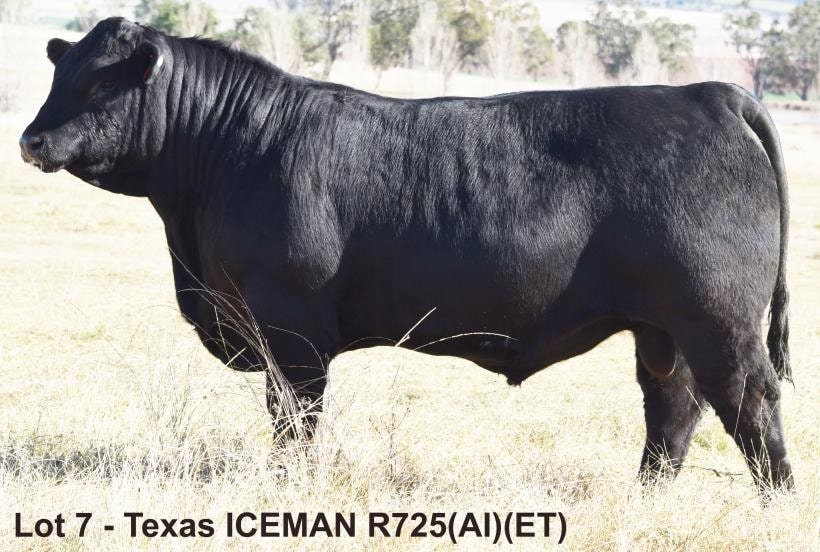 A stud in Northern New South Wales has set a new Australian record after selling a prized Angus bull, Texas Iceman R725, for an eye watering $225,000.

The bull was sold by the Mayne Family at Texas Angus stud, and purchased by Macka’s Angus in conjunction with Genetics Australia who will market semen globally.

Macka’s Angus run 3,500 commercial breeders, 150 stud cows and 140 donor cows across properties in the lower Hunter and Gloucester districts in New South Wales with a focus on producing branded, retail-ready cuts with a strong emphasis on traceability and Angus verification.

The business was attracted to the bull given his pedigree’s performance traits, particularly from the Undine line on the maternal side.

“Phenotypically this bull fits into our program. He has structural soundness, length and depth, has a moderate frame and has great carcase attributes. We will market his semen straws all over the world and see where this takes us,” said Jack McKenzie.

The bull’s impressive statistics include a weight of 730 kilograms at 16 months old with an average daily gain of 1.45 kilograms. Eleven estimated breeding values (EBVs) rated in the top 10% or above for the Angus cattle, most notably for the domestic index, heavy grass index and 400 day weight.

In addition to strong maternal traits, Texas Iceman R725 was sired by record breaker Poss Maverick, ranked in the top 1% of Angus cattle.

Schaff Angus Valley America holds the world record as the most expensive Angus sire, netting his breeders a cool US$1.51 million in 2019.

He was purchased by Herbster Angus Farms, Nebraska with strong performance indicators from a young age. America ranked in the top percentile for weaning weight, yearling weight and carcass weight.

The world’s most expensive cow was sold in the UK earlier this year for AUD$500,000, double the previous record for the Limousin breed.

Wilodge Poshspice, described as “shapely and stylish” was bred from Millbrook Gingerspice, herself a supreme champion cow having won the Balmoral Show three times in a row.

Wilodge sold an additional six heifers for between GBP10,000 and GBP 25,000, but it was the sale of Poshspice that her breeder described as “mind-blowing and surreal”.

“We never ever expected her to make that much in our wildest dreams,” she said. “We are overwhelmed and equally delighted to have achieved this fantastic result,” said stud principal Caroline Williams.

Responding to queries about the cow’s name, Ms Williams explained that the cow’s mother was also named after a Spice Girl and that Poshspice was not an indication of her temperament.